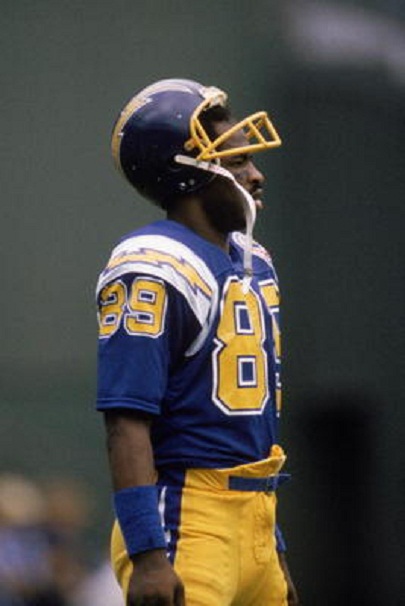 Wes Chandler got his start at wide receiver in the mid 1970’s at New Smyrna Beach High School. In addition to wide receiver Chandler also excelled at running back while in high school and was able to rush for over 1,052 yards his senior year. Thanks to his performance in high school Wes Chandler attracted a good deal of attention from college scouts and he eventually accepted an athletic scholarship to the University of Florida. Although Chandler played in a run first offense during his four years with the Gators he still managed to catch an impressive 92 passes for 1,963 yards while with the team. In both 1976 and 1977 Chandler was voted a first-team All American and as he headed into the 1978 NFL Draft many teams believed he was the best receiving prospect to come out in the last ten years. This hype led to Chandler being selected with the third overall pick in the draft by the New Orleans Saints; the only two players selected before him were running back Earl Campbell and defensive end Art Still.

In his first year with the Saints Wes Chandler played in all 16 games and caught 35 passes for 472 yards and two touchdowns; a respectful stat line for a rookie wide receiver in the 1970’s but not close to the numbers that Chandler would put up in the years following. In his second year Wes Chandler broke out with 65 receptions for 1,069 yards and 6 touchdowns while also earning his first trip to the Pro Bowl. In 1980 Chandler had another stellar 65 catch season with 975 yards and 6 touchdowns. By 1981 Chandler was considered to be one of the best wide receivers in the NFL. During the first 4 games of the season Wes Chandler hauled in 17 passes for an impressive 285 yards but after that fourth game he was abruptly traded to the San Diego Chargers to replace wide receiver John Jefferson who was sent to the Packers after a contract holdout. In the last 12 games of the season Wes Chandler kept racking up yards and catches at a tremendous rate, ultimately ending the season with 69 catches and over 1,100 yards in addition to 6 touchdowns. 1982, which was supposed to be Chandler’s first full year with the Chargers, was shortened to 8 games due to a strike but it did not stop him from leading the league in receiving yards with 1,052 while also racking up a career high 9 touchdowns in just 8 games. Chandler’s average of 129 yards receiving per game in 1982 still stands as an NFL record and may never be broken in a full 26 game season since it would require a receiver to rack up an unheard of 2,016 receiving yards in a single season

In 1983 and 1984 Chandler struggled to break the 1,000 yard receiving mark, averaging only 55 receptions and 776 yards during the period. Fortunately for the Chargers, Chandler returned to form in 1985 with 67 receptions for 1,199 yards and ten touchdowns, the highest dingle season yardage and touchdown total of his 11 year career. By 1987 the Chargers recognized that Chandler was on a decline and he was sent to the San Francisco 49ers for the 88′ season which would ultimately be his last in the NFL as a wide receiver. Wes Chandler ended his career with an impressive 559 receptions for 8,966 yards and 56 touchdowns. This career total may not seem to be much now but Chandler played at a time when the running game was generally considered to be the dominant part of an NFL offense. Ultimately, Wes Chandler would earn a place in NFL history not just because his performance on the field but his contributions on the sidelines as well.

After his career as an NFL receiver Wes Chandler went on to make his impact on younger generations as a football coach. Chandler’s first stint as a football coach came in 1991, three years after his retirement, with the Orlando Thunder of the World League as a receivers coach. In 1993 Chandler took a year off from football but returned in 1994 to serve as a coach with Central Florida before returning to NFL Europe in 1995. From 1995 to 1999 Wes Chandler would serve on the coaching staffs of three NFL Europe teams before heading off to the Dallas Cowboys in 2000. Over the next decade Chandler would serve with a slew of NFL teams as a wide receivers coach before stepping down to the United Football League in 2009.