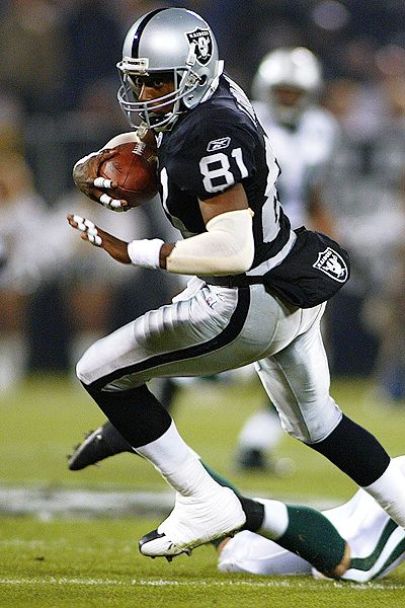 Its almost impossible to have a legitimate discussion about the best wide receivers to ever play in the NFL without hearing the name Tim Brown mentioned at least once. Brown is easily one of the best to ever play the game but his career and contributions to the NFL have been over shadowed by Jerry Rice who was always seemingly one step head of Brown throughout his entire career. Brown was drafted into the NFL in 1988 by the Los Angeles Raiders who took the star wideout with the sixth pick in the draft. Brown was the first pick taken in the draft an was the first of several receivers out of the 1988 draft that would one day become household names, including Michael Irvin and Sterling Sharpe. Brown earned his high draft status in 1988 by lighting the field on fire during his college days with Notre Dame. No doubt being with a high profile program like Notre Dame helped his draft stock but by the time the 1988 draft came along everyone was familiar with “Touchdown Timmy” and what he could do on the field. In his four year career with Notre Dame Tim Brown managed to catch a total of 137 passes to the tune of 2,493 yards and 22 touchdowns while also making a significant mount of noise on special teams and in the run game.

Brown’s rookie year with the Raiders was everything that the scouts expected and more. Brown caught 50 passes for 725 yards in his first season. not to mention the five scores that he also hauled in. As in college Brown also had a significant impact on special teams during his rookie year as he went on to lead the league in returns, return yards and return yard average. Despite the promise he showed during the 1988 season 1989 would turn out to be a disappointment for both Brown and the Raiders as the emerging star would only play in one game the entire season due to a knee injury, catching only 1 pass for 8 yards. Browns third season in the NFL didn’t go much better as he was still in the process of putting his knee injury behind him though he did manage to play in all 16 games of the season. Although he was made a starter in 1991, the first time since he injured his knee, the Raiders still did not see the receiver they saw back in 1988 as Brown managed to catch only 36 passes for 5554 yards and 5 touchdowns. In 1992 Brown improved on those statistics a bit, grabbing 7 scores instead of five, though he still failed to perform up to the potential he showed in his rookie year.

In 1993, his sixth year in the NFL, Tim Brown finally had his breakout campaign as he hauled in 80 passes for 1,180 yards and 7 touchdowns. 1993 would be the first of nine consecutive 1,000 receiving yard seasons and the first of ten consecutive seasons with at least 75 catches. In 1995, the team’s first season bank in Oakland, Brown had the first double digit touchdown season of his career with 10 touchdowns. Browns second and last double digit touchdown season would come in 2000 with a career best 11 touchdowns. From a statistical perspective 1997 was Tim Brown’s most productive year in the NFL as the phenomenal receiver set career bests in both receptions and yards, with 104 and 1,408 respectively.

After Brown’s last 1,000 yard season in 2001 his production hit a steady decline from year to year. 2002 was the first year Brown failed to tally at least 1,000 receiving yards and 2003 saw him record his lowest reception total since 1992. Due to his slumping play, and his unwillingness to accept a smaller role in the Raider’s offense, Brown was released by the Raiders following the 2004 season; he would eventually find a home in Tampa Bay with former Raiders head coach John Gruden. Unfortunately, even a chance of scenery couldn’t stem the decline in Brown production as 2004 turned out to be his worst year in the league, excluding his sophomore season when he only played in one game. Although that nagging knee injury he received in his second season would set him back a few years Tim Brown still managed to put together an extremely impressive career. Perhaps more impressive than the 100 touchdowns or 1,094 receptions he had during his career is the fact that he played a full 16 games season 14 times in his career and appeared in at least 15 games in a season in 16 of the 17 years he was in the NFL.