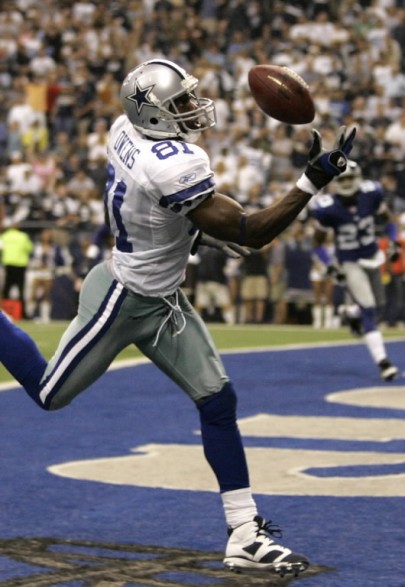 Terrell Owens is better known for his off the field antics than his on the field production but if you can look past his sometimes abrasive personality what you get is one of the most productive players in NFL history. During his college days at the University of Tennessee at Chattanooga Terrell Owens excelled at a variety of different sports, including basketball and track. This cross training of sorts helped him develop the skills that he would need to become one of the best receivers since Jerry Rice. Track and field helped Owens to become a speedster on the gridiron while basketball taught him how to use his natural strength to beat press coverage in addition to teaching him the discipline and control he would need to make some of the more spectacular catches that he is known for. Originally, Owens did not particularly excel on the football field but he made progress one he became a starter in his sophomore year. By his senior year Owens’ production had dropped significantly due to the fact that he face double coverages almost every week. Due in part to this dip in Production Owens slipped to the third round of the 1996 NFL draft where he was select by San Francisco 49ers with the 89th pick. Being selected by the 49ers allowed Owens to play with and lean from his childhood idol Jerry Rice, not to mention that he would be able to start off his career in the NFL catching passes from future Hall of Fame quarterback Steve Young.

In his first season with the 49ers Terrell Owens contributed a great deal on special teams while still managing to catch 35 passes for 520 yards and 4 touchdowns. Owens was able to breakout in his second year in the NFL after Jerry Rice was lost for most of the season with a torn ACL. With Rice sidelined for the year Terrell Owens became one of the top targets for quarterback Steve Young which allowed him to record 60 receptions for 936 yards and 8 touchdowns, doubling his rookie year production in some categories. The following year would prove to be Terrell Owens’ first 1,000 yard season with 1,097 yards while he also racked up a career high in receptions with 67 and touchdowns with 14. With the help of Terrell Owens and a healthy Jerry Rice the 49ers would go 12-4 in 1998 and Owens would have one of his career moment in a playoff game against the Green Bay Packers. After struggling with drops the entire game Terrell Owens would eventually make the game winning catch that would allow the 49ers to beat the Packers for the first time in six games.

When Steve Young went down a quarter of the way into the 1999 season so too did Terrell Owens hopes for a second 1,000 yard season. 1999 also saw Owens miss his first NFL game due to injury and the normally healthy receiver would go on to play just one full 16 game season over the next 7 years. Owens enjoyed a bounce back year in 2000, and arguably one of the best years of his career as he made his way to 1,451 yards receiving and 13 touchdowns on the back of 97 receptions in just 14 games. The 2000 season was the start of a super productive five year period that saw him record 1,100 receiving yard seasons five times in a row. Had he not been injured in 2005, his second season with the Philadelphia Eagles, Terrell Owens very well could have stringed together 8-9 1,100 yard seasons but as it stood he was only able to play in 7 games in 2005 due to a conflict with the team, keeping him well short of the 1,100 yard mark he had reached his previous five seasons. By the end of 2005, after conflicts with quarterback Donovan McNabb and head coach Andy Reid, Terrell Owens short stay with the Eagles came to an end and he was released. Owens next stop was with the Dallas Cowboys where he would continue to make headlines for his mouth in addition to his play on the field. After 3 highly productive seasons with the Cowboys Terrell Owens was released and subsequently signed a 1 year contract with the Buffalo Bills. While with the Bills Owens reached 1,000 career receptions, becoming only the sixth NFL player to reach the 1,000 reception mark. In 2010 Owens again signed a one year contract but this time it was with the Cincinnati Bengals where he was paired with Pro Bowl Receiver Chad Ochocinco. After another productive season in 2010 the future hall of Fame receiver suffered a torn ACL during the off season, destroying his chances of continuing his 15 year career with another team.