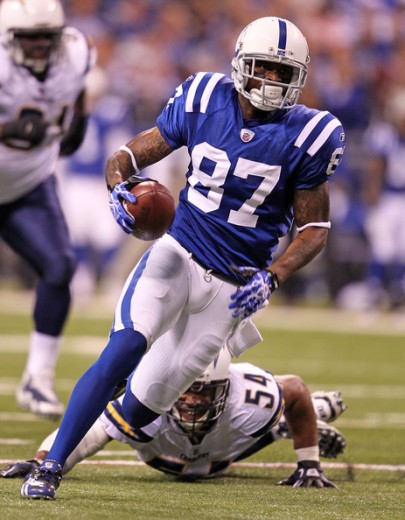 Reggie Wayne has spent much of his career with the Colts playing second fiddle to future Hall of Fame wide receiver Marvin Harrison though with Peyton Manning guiding the Indianapolis offense there was always more than enough passes to go around. Not very many teams could claim to have had two of the best wide receivers in the league on the roster at the same time, let alone paired with arguably the best quarterback of all time. It was this combination of elite talent on offense that made the Colts so effective in the first decade of the 21st century. One of the main knocks on Reggie Wayne is that wherever he has played he has always been surrounded by tremendous talent on both sides of the ball.

At the University of Miami Reggie Wayne was able to play with future NFL standouts such as Ed Reed, Santana Moss and Andre Johnson, meaning he was rarely the best receiver on the team and did not have to go up against the elite college defensive backs. Despite playing with Andre Johnson and Santana Moss Reggie Wayne was still able to accomplish a good bit during his four years at the University of Miami, including setting a new school career reception record with 173 catches as well as a freshman reception record with 48. Reggie Wayne’s habit of being the second best wide receiver carried over into the NFL draft, where a handful of other receivers were selected before him in the first round. Reggie was ultimately picked by the Colts with the 30th overall pick and though he may not have been the first receiver to come off the board, ten years later it is easy to see that Wayne was the best receiver to come out of the 2001 NFL Draft.

While it is true that Reggie Wayne landed in the best situation possible for a rookie wide receiver, with an all-time great QB throwing him the ball and an all-time wide receiver on the other side to draw attention away from him Wayne didn’t quite live up to expectations his first few years in the league. In his rookie year Wayne managed to play in only 13 games can caught a paltry