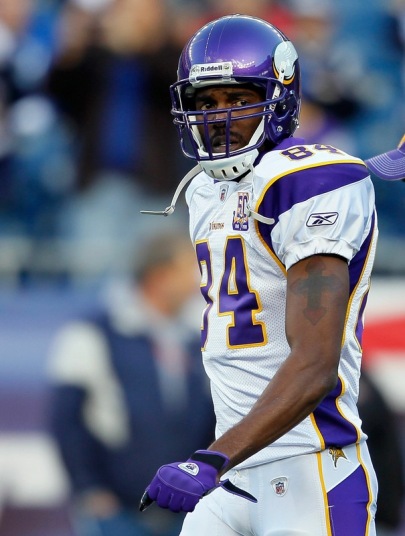 Randy Moss is the type of receiver that only comes around once in a decade. A supreme talent that can carry his team the way few other receivers can. Unfortunately, for all of Randy Moss’s talent and contributions on the game he is most likely to be remembered for his less than productive behavior both on and off the field. Moss first showed potential as a star wide receiver in high school, where he doubled as a defensive back and special teams all star for his team while he also played basketball, baseball and ran track in the off season. During his high school days Moss helped his team win two state championships while also being named West Virginia Football Player of the Year in 1994. During his senior year in high school Moss was recruited by a variety of high profile college teams but ultimately chose to commit to Notre Dame. Soon after Moss was involved in a racially motivated fight that led to the rejection of his admittance to Notre Dame and his ultimate enrollment at Florida State. Because he was technically considered a transfer player in 1995 Moss was red-shirted as a freshman and would not see any action until the following year.

In 1996 Moss once again found himself in trouble after testing positive for marijuana while on probation. This infraction led to a 60 day jail sentence and his dismissal from Florida State and his eventual transfer to Marshal University in Division I-AA. Though Moss was much maligned by his off the field antics in 1996 he still managed to break several Division I-AA records including most receiving yards ever gained by a freshman. In his freshman year at Marshall University Randy Moss also tied Jerry Rice’s record of most touchdowns in a single season with 28 touchdown grabs. The following year Randy Moss combined with Marshall quarterback Chad Pennington to create one of the most explosive offenses of the college season, a connection that Marshall university ode all the way to the Mid-Atlantic title. After two highly productive seasons at Marshal University that saw him catch a touchdown in every game that he played in Randy Moss declared for the NFL draft and was considered by most to be one o the top receiving prospects on the board despite only having two seasons of college experience.

The Minnesota Vikings selected Randy Moss with the 21st pick of the 1998 NFL draft, a selection that would prove most wise as Randy Moss would help the Vikings post a 15-1 regular season record and make a run for the Superbowl until they were knocked off by the Atlanta Falcons in the NFC championship. Moss’s 1998 season is arguably one of the most productive seasons for any rookie receiver in the history of the NFL. Making an appearance in all 16 Games Moss caught 69 balls for over 1,300 yards and 17 touchdowns.In his first six seasons in the NFL Moss never fell below 1,200 yards receiving on the season while also recording double digit touchdown grabs in all but one of his first six campaigns. During hi first four seasons with the Minnesota Vikings Randy Moss was lucky enough to play alongside of and learn from one of the NFL’s greatest receivers in Chris Carter. Before Carter left the team after the 2001 season the Moss & Carter receiving tandem was recognized as one of the most dynamic tandems in the NFL.

In 2005, after failing to play in all 16 games and record over 1,200 receiving yards for the first time in his career the previous season Randy Moss was traded to the Oakland Raiders where he was initially hailed as a savior but never quite lived up to expectations. With the Raiders Randy Moss started to get a reputation as player that failed to consistently give his best, often giving up on plays. After two semi-productive seasons in Oakland marred by controversy Moss was traded to the Patriots during the 2007 NFL Draft. Moss enjoyed a resurgence in his career with the highly structured and highly disciplined Patriot team led by future hall of fame coach Bill Belichick. After enjoying three wildly successful seasons with the Tom Brady led Patriots Randy Moss once again allowed controversy to dampen his carer as he engaged in a contract dispute with the team. Eventually, four games into the 2010 NFL season Moss was traded back to the Vikings where he was paired with Brett Favre though it was a match that would not last. Just four weeks later, after trading a third and seventh round draft pick to the Patriots for the receiver, Moss was waived by the Vikings and claimed by the Tennessee Titans where he would finish out what would prove to be his last season in the NFL.