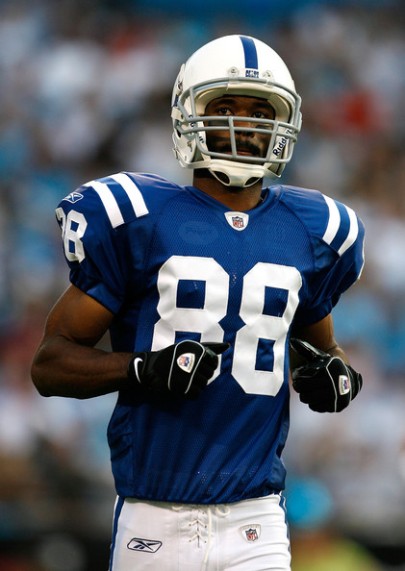 If Jerry Rice had never made it to the NFL people would likely be talking about Marvin Harrison as the best receiver to ever play in the NFL. Like Rice, Marvin Harrison had the benefit of catching balls from a future hall of fame QB in Peyton Manning; a quarterback that many suggest may be the best to ever play the position. Harrison first turned heads as a receiver at Syracuse University where he enjoyed a breakout senior season in 1995 with Donovan McNabb throwing him the ball. During that 1995 campaign Harrison hauled in 56 passes to the tune of 1,131 yards and eight touchdowns in 11 games. Harrison’s senior season at Syracuse drew the attention of every respectable NFL scout and going into the 1996 draft Harrison was one of the top ranked receivers on the board.

Although he was ranked at the top of some draft board Marvin Harrison had to wait until the Indianapolis Colts selected him with the 19th overall pick, a selection they had obtained after they traded quarterback Jeff George to the Atlanta Falcons. Harrison was the fourth receiver taken in this deeply talented wide receiver draft class that featured fellow future standouts like Keyshawn Johnson, Terrell Owens, Eric Moulds, Terry Glenn, Joe Horn and Amani Toomer. In his first year with the Colts Marvin Harrison started all sixteen games and hauled in a respectable 64 passes for 834 yards and eight touchdowns. Harrison’s sophomore season was quite similar to his rookie year though he managed to tally nine more receptions and 30 more yards while coming up with 2 less scored. In 1998, Harrison’s third year with the team and first year with rookie quarterback Peyton Manning, he would miss an NFL game for the first time in his career and would end up missing a quarter of the season with an injury. Sine he was only play in 12 games in 1998 Harrison’s stats took a bit of a dive, though there were flashes between him and rookie quarterback Peyton Manning that gave fans a picture of what to expect the following year.