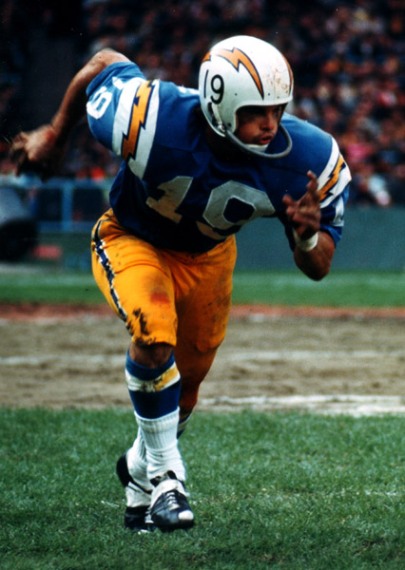 With the emergence of the AFL in the 1960’s the NFL suddenly had competition for the rights of players coming out of college for the first time in decades. The result of this competition was a fierce bidding war between the teams of the two leagues to secure the top talent in each year’s draft, one of the first players to be sucked into this bidding war was wide receiver Lance Alworth.

Lance Alworth established himself as a superior athlete early on in high school where he played football and a variety of other sports that showcased his speed and athleticism. It was his natural athletic ability that drew the interest of the New York Yankees and Pittsburgh Pirates, both of which offered him contracts as he came out of high school. Despite the offer to play baseball with a professional team Alworth chose to participate in college athletics instead at the University of Arkansas where he would star in both football and track. During his junior and senior year Lance Alworth led the nation in punt return yardage, thanks in large part to his exceptional skill which he routinely showcased in track competitions.

When he came out of college Lance Alworth was highly sought after by the team’s of both leagues. He was picked 8th overall in the NFL draft by the San Francisco 49ers while being selected 9th overall by the AFL’s Oakland raiders. Soon after the draft the Raiders traded the rights to their new wide receiver to the San Diego Chargers in exchange for a handful of players. Which team and league he would play for was completely up to him and he ultimately decided to sign with the Chargers, making him one of the few players in professional football to be drafted by two different teams in two different leagues and sign with neither one of them.

Lance Alworth’s rookie season in the AFL was less than stellar, he played in only 4 games in 1962 and caught just 10 passes for 226 yards and 3 scores, though his impressive 22.6 yards per catch was indicative of things to come. The following year Lance Alworth broke out as one of the best wide receivers in the AFL, compiling 61 catches for a very impressive 1,205 yards and 11 touchdowns. Alworth’s 1963 campaign earned him the first of seven selections as an AFL All-Star and an All-AFL player while also being name as the AFL player of the year for 1963. The emerging wide receiver also helped his team to the AFL Championship where the Chargers would defeat the Boston Patriots. The Chargers and Lance Alworth would make two more appearances in the AFL Championship following the 1964 & 1965 season only to be defeated by the Buffalo Bills in both contests.

In both 1964 and 1965 Lance Alworth either improved or matched his career bests in almost every statistical category. !964 saw him put up another 61 catch season while piling up 1, 235 yards and 13 score. The following in 1965 Lance Alworth produced what is largely considered to be his best season in professional football, accounting for 69 catches for an astounding 1,602 yards and 14 touchdowns. The stts from Alworth’s 65′ season would be considered to be impressive even today, but 45 years ago such production was almost unhear of by a wide receiver. From 1963 to 1969 Lance Alworth would compile 7 consecutive seasons with at least 1,000 receiving yards and 50 catches but after his production dropped significantly in 1970 he was traded to the Dallas Cowboys. With the Cowboys Alworth failed to make a return to his glory days but he did remain a consistent contributor and even caught a touchdown pass in Super Bowl VI to help the Cowboys beat the Dolphins.