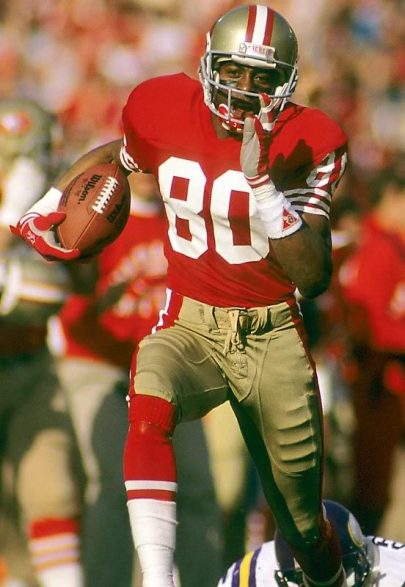 Not only is Jerry Rice the best wide receiver to ever play the game he may also be the best player at any position to ever strap on a helmet in the NFL. Throughout his career Rice broke almost every career receiving record in the books, most of which look to be unbreakable even in today’s world of the pass happy NFL offense.

Rice first blossomed into a star receiver while he was playing for Mississippi Valley State University where he set a NCAA career record for touchdown with 50. During his tenure at Mississippi Valley State University Rice also amassed over 300 catches while racking up over 4,600 yards, all the while attracting the attention of NFL scouts. Although Rice had proved his worth in college a questionable 40 dash speed caused his value to take a hit. While it has been argued that Rice should have went in the top 5 of the 1985 NFL draft he wasn’t taken off the board until pick number 16 after the San Francisco 49ers traded picks with the Patriots to move up ahead of the Cowboys who were picking 17th and reportedly had interest in Rice.

Although we recognize Jerry Rice as a star wide receiver today, his future was never set in stone, at least not initially. In 1985, during his rookie season with the 49ers, Rice caught 49 balls for 927 yards and 3 touchdowns but his season was marred by a series of drops balls which were uncharacteristic for Rice. After recording NFL Offensive Rookie of the Year honors in 1985 Rice followed up his rookie campaign with his first