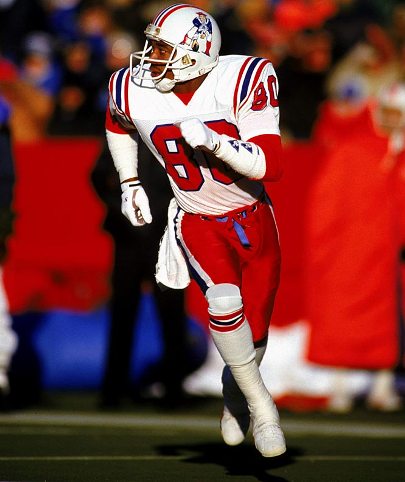 Irving Fryar was never one of the most productive receivers in the NFL, in fact according to his seasonal stats he could easily be considered to be quite mediocre for much of his career. Unlike most receivers who have their most productive seasons in their late 20’s and early 30’s Irving Fryar waited until the ripe old age of 35 to have the best year of his career. Fryar was never the best receiver in the NFL, but then again he was hardly the worst either. Bad receivers don’t put up almost13,000 career receiving yards and over 850 receptions. Fryar may not have been elite, but he was nothing if not reliable and consistent.

After play wide receiver in high school for Rancocas Valley Regional High School Irving Fryar committed to the University of Nebraska where he would play alongside a Heisman trophy winner in running back Mike Rozier and a Heisman finalists in quarterback Turner Gill. Irving Fryar was an All-American at Nebraska and heading into the 1984 draft he was considered to be one of the best receiving prospects to come out in years. Fryar’s performance in college coupled with the fact that the 1984 draft was not very deep at receiver meant that he was highly sought after by teams that had a void to fill at wide receiver. On draft day Fryar didn’t have to wait long to be selected, he was picked by the New England Patriots with the very first selection, immediately answering the question of which team would get to enlist his services. In addition to being the first layer and wide receiver taken in the 1984 Irving Fryar was also the first wide receiver to ever be taken with the first pick in the draft.

When the Patriots selected Irving Fryar with the first pick in the 1984 draft they probably expected more from the All-American wide receiver than just reliable and consistent production but that is what they got. Fryar spent 9 of his 17 seasons in the NFL with the New England Patriots and only once did he surpass 1,000 yards and that was his second to last year with the team. In his first year with the Patriots Fryar showed flashes of potential but failed to make the impact expected by a player taken with the first pick in the draft, catching only 11 passes for 164 yards and one touchdown. In 1985 Irving Fryar made a substantial improvement over his rookie year production with 39 receptions for 670 yards and 7 touchdowns. Patriots fans and staff probably anticipated a breakout year in the young receiver’s near future but unfortunately his production in his second year in the league would be the type of production he would have throughout the rest of his career. Sure he would have the occasionally 1,300 yard season but he would also have quite a few sub 600 yard seasons to average things out.

Despite putting up rather average stats in his sophomore season Irving Fryar was still named an All-Pro and elected to his first Pro Bowl ahead of many more deserving candidates that lcked the name recognition of the Patriots wide receiver. Irving Fryar would not make it back to the Pro Bowl again until 1993, his first year with the Miami Dolphins, after he produced his second career 1,000 yard season.

After failing to live up to expectations with the Patriots Irving Fryar made his way to the Miami Dolphins where he would record his first back to back 1,000 yards seasons in the first two year with the team, thanks in large part to the chance to catch passes from Hall of Fame quarterback Dan Marino. After three highly productive seasons with the Dolphins Irving Fryar made his way to the Philadelphia Eagles. Fryar’s stint with the Eagles would start off much like his one with the Dolphins, with two back to back 1,000 yard seasons in his first two years with the team. in 1998, Fryar’s third year with the Eagles, he came back down to earth with a 556 yard season. Fryar would spend both 1999 and 2000 with the Washington Redskins before he officially decided to hang up his cleats and retire. Over his career Irving Fryar caught passes from an NFL record 19 different quarterbacks and was also the first wide receiver to catch a touchdown in 17 consecutive seasons, a mak since surpassed by Jerry Rice.