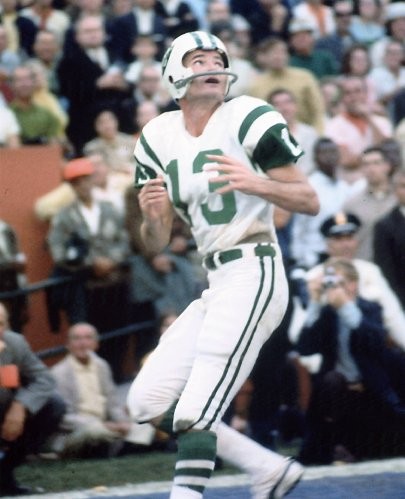 Unlike most star receivers Don Maynard was never really known for putting up great statistical seasons year after year, though after it was all said and done he still managed to walk away with what is considered by many to be the best statistical career for a wide receiver in the pre-modern NFL. Almost everything about Maynard’s professional football career was unconventional, even the way in which he made it to the NFL. After lighting it up for four years at the relatively small Texas Western College, where he won numerous conference accolades, Don Maynard was selected with the 109th pick by the New York Giants. While this was a rather normal start for most collegiate players, Maynard’s career took a few odd turns immediately following the draft. Although he was drafted in 1957 Don Maynard did not actually play until 1958 because he was a futures pick. Even when he did manage to get on the field for the Giants in 1958 he still had very few opportunities to produce and was cut by the team following his rookie year after recording only 5 catches for 84 yards.

Instead of signing with another NFL team after being cut by the Giants Maynard instead decided to spend 1959 in the Canadian Football League playing wide receiver for the Hamilton Tiger-Cats. After a one year stint in the CFL Maynard returned to professional football in the U.S., though instead of signing on with an NFL team Maynard hitched his star to the upstart American Football League that was heading into its first year of competition. Don Maynard was the first player signed by the newly created New York Titans, who would later change their name to the New York Jets. In his first year with the Titans, his third year in professional football, Don Maynard accumulated an impressive 72 catches for 1,265 yards and six touchdowns. His performance in 1960 also resulted in him being selected as an AFL All-Pro, the first of five selections he would have throughout his career. After what can only be described as a truly incredible season in 1960 Don Maynard, in addition to the rest of the New York Titans, had a rather disappointing campaign in 1961, catching on 43 balls for 629 yards and 8 touchdowns. In typical Don Maynard fashion the fifth year wide receiver bounced back in 1962, compiling 1,041 yards and 8 touchdowns on just 56 catches.

For the next two seasons Don Maynard would continue to put up decent, but not great, receiving stats with New York. This would change in 1965 when Joe Namath joined the New York Jets and Don Maynard used the charismatic