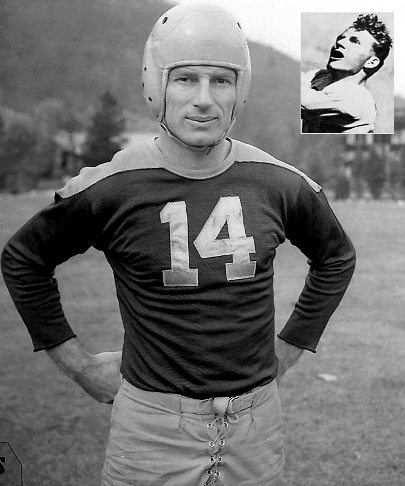 Although his stats pale in comparison to the stats put up by modern day elite NFL receivers Don Hutson is still recognized by many as the first truly star receiver to play professional football. Like many professional football players in his day Don Hutson played multiple positions and was a critical component of the Packer’s offense, defense and special teams throughout his career, though he made by far the biggest impact at the wide receiver position.

When Don Hutson graduated from Alabama in 1934, in an era before the draft when college players were allowed to sign with any team, there wasn’t much interest in the standout collegiate receiver because at that time most NFL offenses relied heavily on the run and Hutson was regarded as too think and lanky to be of any use in the running game. However, always going against the grain, Curly Lambeau was attempting to develop one of the league’s first consistent passing attacks and he decide that the speedy Hutson would be a perfect fit for his team, the Green Bay Packers. Lambeau did not have to wait long to find out that he had made the right decision in signing Don Hutson. In his first game in the NFL, on his very first play, the wiry wide receiver caught an 83 yard touchdown pass from Packers quarterback Arnie Herber. By the end of his rookie season Don Hutson had tallied eighteen catches for an impressive 420 yards and 6 touchdowns. In his second year with the Packers Don Hutson was given a significant role in the Packers passing game and his 34 catches for 534 yards and 8 touchdowns on the season helped the Packers to win the NFL title in 1936, the first of three titles that the Packers would win during Hutson’s career.

Don Hutson’s best statistical year came in 1942 when he caught an amazing 74 balls for 1,211 yards and 17 touchdowns. That stat line is considered impressive for a receiver even today in the pass happy NFL but Hutson accomplished this feat in a time when passing was the exception, not the rule; not to mention the fact that he complied those stats in only 11 games. Hutson’s performance in 1942 also resulted in him being named league MVP for the second time in his career and for the second consecutive season. Hutson was first named league MVP in 1941 after he became the first receiver to have more than 50 catches in a season. In addition to his role as star wide receiver, Hutson also played on special teams and defense for the Packers. For a number of years he served as the Packer’s place kicker, tallying over 170 extra points and 7 field goals. On defense Hutson often played at the position of safety where he managed to compile 30 interceptions in the last six years of his career, ten of which came in a single season.

Although he was considered by many to still be in his prime and performing at a top level Don Hutson surprised the NFL when he declared his retirement after the 1945 season, bringing an end to an astounding 11 year career. By the time he called it quits Don Hutson held almost every major receiving record in professional football, a handful of which still stand today. Hutson’s career total of 99 touchdowns was a mark that stood until it was broken by Steve Largent in 1989, almost 45 years after Hutson walked away from the NFL. To this day Hutson still holds the NFL record for most consecutive seasons leading the NFL in receiving yards, a mark he set from 1941 to 1945. In 1951 the Gren Bay Packers officially retired Don Hutson’s #14, making it the first number to be publicly retired in team history. When the Pro Football Hall of Fame was created in 1963 Don Hutson was among the chart class of admissions.

In addition to his amazing stats Hutson is also often credited with revolutionizing the position of wide receiver in professional football, primarily by creating many of the routes that are ran by receivers today. Because of his production and the way he played the game many people consider Don Hutson to be the first in a long line of modern receivers that features receiving standouts such as Steve Largent, Jerry Rice and Randy Moss.