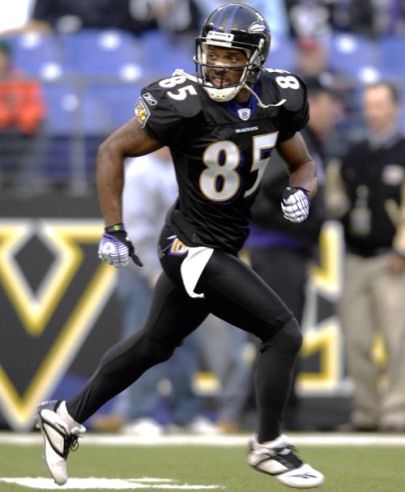 Derrick Mason has been one of the most consistent receivers in the NFL over the last 17 years. While he may not be the elite receiver that most teams seek in todays pass happy offense Derrick Mason has shown time and again that he can still be a threat in the passing game.

Mason started showing flashes as a play making wide receiver back in his high school days where he set records for both catches and yards at Mumforh High School in Detroit, Michigan. After high school Mason attended Michigan State where he played both wide receiver and the role of return man during his four year career. At Michigan State Derrick Mason set a school record for return yards, with 2,384 yards, while also catching 8 touchdowns as a receiver as well. Heading into the 1997 NFL draft Derrick Mason wasn’t regarded as a top receiving prospect by most teams which allowed him to be scooped up by the Tennessee Oilers with the second pick in the fourth round. Little did the Oilers known that they had just struck gold with their mid round pick.

Derrick Mason struggled in his first few years in the league, finding it hard get enough opportunities to make a play. In his rookie season Mason caught just 14 passes for 186 yards, not too bad considering he was a fourth round pick. In his Sophomore season Mason nearly doubled his rookie stats, accounting for 25 receptions for 333 yards and three scores. In 1999, the team’s first year as the Tennessee Titans, Mason missed three games and recorded a career low 8 receptions for a paltry 89 yards. Coming off of such a pathetic season after his third year in the NFL expectations for the fourth round pick were as low as ever. Wide receiver Derrick Mason went into the 2000 season with the Tennessee Titans with a chip on his shoulder and something to prove, and prove it he did.

Derrick Mason broke out in his fourth year in the league, catching 63 passes for 895 yards and five touchdowns on the way to the first Pro Bowl selection of his career. Having emerged as a legitimate receiving threat in the NFL there was almost no stopping Derrick Mason. In 2001 Derrick Mason destroyed all of the career highs he had set for himself during the previous year as he caught 73 balls for 1,128 yards and nine touchdowns.While 2001 was the first 1,000 receiving yard performance of his career it would by no means be the last. Over the next nine seasons Mason would establish himself as one of the most consistent pass catchers in the game, often times out performing those elite receivers that occasionally put up bad statistics for a season.

From 2001 to 2005 Mason strung together 5 consecutive 1,000 yard seasons but was only sent to the Pro Bowl once, following the 2003 season, during that period. That 2003 campaign has to this point been the