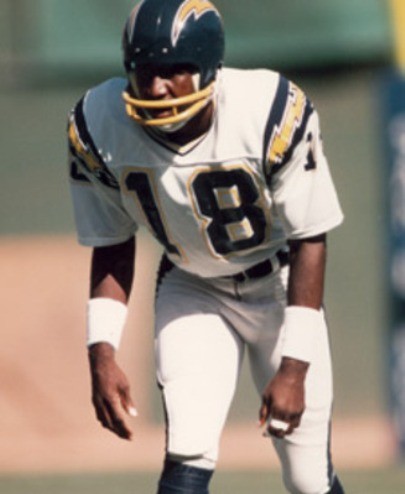 Charlie Joiner isn’t a name that you hear thrown around in the best receivers of the NFL discussion very often, and he certainly doesn’t have the name recognition of a Jerry Rice or a Steve Largent but in his day, and especially at the time of his retirement, Charlie Joiner was recognized by many as one of the best receivers in the history of professional football.

Charlie Joiner played his college ball at Grambling Sate University where he became one of the most productive wideouts in the school’s history while winning numerous awards and accolades, including being named to he first team ALL-SWAC three consecutive times from 1966 to 1968. Despite his production in college when Joiner was drafter by the Houston Oilers in the 4th round of the 1969 NFL draft he was selected for his potential as a defensive back. Initially during his rookie season with the Oilers Charlie Joiner played almost exclusively at defensive back until he was injured trying to tackle Broncos running back Floyd Little. Shortly after, Joiner solidified himself as viable receiving threat even though he would only catch 7 balls for 77 yards in his first year in the league. Charlie Joiner enjoyed more time on offense in 1970 and his stats improved quite a bit, jumping to 28 receptions for 416 yards and three scores. The following season Charlie Joiner recorded a career high 681 yards and 7 touchdowns on 31 receptions which would turn out to be his best performance with the Oilers since he would be traded to the Cincinnati Bengals half way through the 1972 season.

Charlie Joiner’s three and a half season stint with the Bengals would turn out to be a continuation of his three and a half years with the Oilers. With both team’s Joiner would at times struggle to stay on the field, missing a career high 7 games in 1973, while also showing flashes of becoming an elite pass catcher in the league. Joiner’s best season with the Bengals came in 1975 when he set new career highs in receptions (37) and yards (726) while scoring 5 touchdowns. Oddly enough, it was after this career years that Charlie Joiner was once again traded, this time to the San Diego Chargers, the team where Joiner would build his legacy as one of the best receivers in professional football. Unlike in his stint with the Oilers and Bills Charlie Joiner got off to a quick start with the Chargers, posting his first ever 1,000 yard season in his first year with the team while also catching a career high 50 passes and matching a career high 7 touchdown grabs. Joiner’s performance in his first year with the Chargers also earned him his first spot in the the Pro Bowl.

In 1977 & 1978 Charlie Joiner briefly dropped down to his typical production level, averaging around 550 yards and 34 catches each season. While 1978 was the first year of the famous “Air Coryell” offense developed by head coach Don Coryell Charlie Joiner did not get in on the act until the following year when he obliterated his career high reception total with 72 catches for 1,0008 yards and four touchdowns and earned his second of three Pro Bowl appearances. In 1980 Charlie Joiner had one less catch but improved his yardage totals by over 120 yards, setting a new career high 1ith 1,132 yards while still scoring 4 touchdowns.