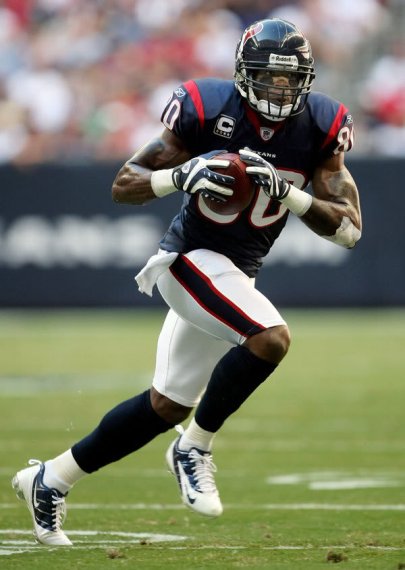 Rarely can it be said that a single player defines an entire team, especially in the NFL, which is supposed to be the consummate team sport. The exceptions to this rule tend to be quarterbacks, such as Peyton Manning and the Colts or Brett Favre and the Packers; wide receiver Andre Johnson is one player that does not fit the pattern. Since being Drafted by the Houston Texans in 2003 Andre Johnson has come to represent the entire Texans franchise with his hard nosed and physical play and humble demeanor.

Andre Johnson has known success at every level of the game yet unlike many star receivers he has not let it go to his head. As a teenager Andre Johnson player football at Miami Senior High School where he impressed scouts to such an extent that he was considered to be one of the top prospects in 1999. At the University of Miami Andre Johnson continued his dominating ways, racking up 92 receptions for 1,831 yards and 20 scores in his four year with the Hurricanes, enough to make him one of the top receivers in school history. Heading into the 2003 NFL draft Andre Johnson was once again in familiar territory, considered to be one of the top prospects coming out of school. Ultimately he would be the third selection in the draft, behind only quarterback Carson Palmer and fellow wide receive Charles Rogers, picked by the expansion Houston Texans which were in only their second year in the NFL. Johnson was to be paired with second year quarterback David Carr in the hope of forming a young and talented offensive duo that could lead the team towards success.

In his rookie year with the Texans Andre Johnson immediately established himself as one of the premier receivers in the league, recording 66 receptions to the tune of 976 yards and 4 touchdowns. Unfortunately, even with Andre Johnson the Texans only managed to win five games in 2003, only one game more than the previous year. In his second year Andre Johnson was even better, catching 79 balls for 1,142 yards and 6 touchdowns while also earning his first trip to the Pro Bowl. On the back of Johnson’s performance the Texans improved to 7-9 though it was still only good enough for 3rd in the AFC South. In 2005 both Johnson and the Texans disappointed, the former missed three games and recorded career lows in yards, touchdowns and receptions while the later posted a franchise worst 2-14 record. Johnson bounced back in 2006, playing in all 16 games while setting career highs in both yards, with 1,147, and catches, with 103, in addition to making his second appearance in the Pro Bowl. The Texans signed Johnson to a sizable contract extension before the 2007 season though Johnson would play in only 9 games due to injury.

In both 2008 and 2009 Andre Johnson led the lead the league in receptions and receiving yards, recording 115 catches and 1,575 in 2008 and 101 catches for 1,569 yards in 2009. Andre Johnson also made consecutive Pro Bowl appearances during these two years and would increase that streak to three in 2010. The main reason Andre Johnson enjoyed such an increase in production in 2008 is the addition of quarterback Matt Schaub to the Texans offense in 2007 and the arrival of head coach Gary Kubiak in 2006. The combination of Andre Johnson and Matt Schaub has proved to be one of the more potent in the league, and will likely continue as such in the years to come. in 2010, coming off of two consecutive 100 catch 1,500 yard seasons expectations were high for Andre Johnson and had he not missed another three games due to injury he likely would have added another such season to his resume. 2011 proved to be Johnson’s most disappointing season to date as he was only able to play in 7 games while recording a paltry 33 receptions for 492 yards and 2 touchdowns.

If there is any legitimate criticism of Andre Johnson it is only that he has struggled to stay healthy during his career in the NFL, missing 22 games in his first 9seasons in the NFL. Had he played in those 22 games Andre Johnson could easily have added another 1,700 yards and 140 catches to his career totals. The 2011 season was Johnson’s 9th in the league but even so the potentially Hall of Fame receiver is still only 30 years old, giving him plenty of time to improve upon his already impressive career stats.